Words means so much, even more so the lack of it, as in communication. People are so quick to draw conclusions and hold malice towards each other. That way of living can’t be healthy for the Psychological wellness. One would think that ill will is an Engine we run on. I should be a Life Coach on this matter, my Family thought me well. My Mother was the Third Child in a Family of Twelve Children. She was taken out of School at an early age to help raise her Siblings. She even helped raising her Siblings Children. It appears to me that having Kids back then was a popular pastime. All through my Childhood I noticed that this Family was not as Cohesive as the Walton’s Family. At no given Time all the Members of this Family was in Harmony. 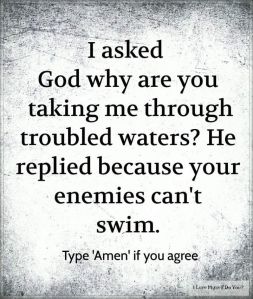 There was always One who wasn’t speaking to that One for whatever reason. The One that struck my attention was her younger Sister. I described her in One of my earlier Blog as someone who had the J.R. Ewing syndrome ( Someone who isn’t happy unless the World was on fire). She took the he said she said Sword of Division to another level. The Recipients would Pregudically Hate the One presumed to have said whatever. This was a Christian Family, so I ask the question, if this can happen in a Christian Family, what of the World of So many Persuasions. All the Wars, Political Upheavals and Social Discords comes back to me as the answer. People relishing bad Blood goes back to Cain killing his Brother.

It’s a Curse that we have to live with, Rising above ourselves is the challenge of all Eternity. As I have stated over and again, I am a watcher of People, being that way all my Life, that’s how I learn how to live my Life, or how not to live my Life. When I dig deep within my Soul for Answers, I find comfort in knowing that they Stoned Jesus when he was on the Cross, Barbarism is here to stay. How we deal with our Inadequacies defines us. Now we come to the Motivation for this Blog. Sitting at my Mom’s bedside in a Nursing Home, we rehashed all the above mentioned. I told her that once she Passed, I was done with certain members of this Family. She Besieged me to change my Mind.

She made me promised that I would be the Peacemaker, I Promised her. A Promise that I renaged on. The long Traits of bad Blood continued. It has been Seven years since she has been gone. One of the People I Promised her that I would not have Ostracized, cut Ties with me the Week of her Death. Seven Years later not a Word has blown by us. Guess what? I haven’t lost any sleep, I have resided myself that this is my Legacy, their lost. So anyway last week I was agonizing that I haven’t spoken to my Cousin who lives in Miami for a whole year, all through this Pandemic. I said to myself that she also could have called. Nonetheless I made the call, she was elated to hear my voice. I have always known that she loved me. She told me that she also agonized from not hearing from me.

Where the Conversation went is exactly what prompted this Blog. This One goes out to the Ones I 💘 Love. This One goes out to the Ones I left behind. She told me that she was Battling for her Life, being treated for Cancer. I thought to myself, my God what a miserable existence we call living. If you go to the Shelter and bring home a Puppy and a Kitten. Living in the same household and growing up together. They would never know that they were different and they would never fight. Us Humans could take a Lesson form these lower Species. Working in a Nursing Home in Pennsylvania brought me Full Circle with my Mortality. It was there that I realized that all my years up to that point were wasted. Keeping Malice, having animosity and worried about the price of Tea in China is downright pissing your Life away.

This Earth is your Garden of Eden that we take for granted, these People around us are our Gifts, seek out the Good. In this Nursing Home they had 123 Beds, one belonging to a Black Woman. I was the Only Black on the Staff, I don’t need to spell it out for the Deaf, who only travels to the beat of the Drums. While working there I befriended many of the Residents. I would go to their rooms and break the stalemate of boredom and Degection. I communicated while listening to their Stories and they and they’re Families Loved me for doing so. My Favorite was an Irish Woman in her Eighties who had never interacted with a Black Person. Liz and I grew so tight we adopted each other as Mother and Son. When she Died I went to her Room and kissed her goodbye, for I knew that a part of me was gone. That’s how People should live, ” When you go to Bed angry you are saying Prayers to the Devil” you might not awake and so you take your Hate with you. Look deep in your Heart, what you see is exactly what God sees.

P.S. This may be my Best Blog, Blogging is delivering a Message and I believe that I did.