At fourteen years old my Mother told me that I should seek out the five Percent good People which I told her were all there were in the World. Since then I have discovered a greater Number than I thought at Fourteen. The fifty four percent that I have discovered, somehow seems to be a Minority. It appears to me that the forty six percent wants America to regress to nineteen sixty eight instead of moving on to be a kinder gentler Nation. Back then we had no Internet, so you couldn’t Tweet your Thoughts of Hate, you Demonstrated it with Force of Brutality on innocent Men Women and Children trying to cross the Selma Bridge.

The Dark Web has been a source of Light for me as of Late, finding out that People who I have Thought to be Enlightened Children of God, still harboring Governor Lester Maddox Mentality. My Faith in Religion is experiencing an Earthquake. Fifty four years of believing Mother that we are all God’s Children is Crumbling at the Foundation of my Spirituality. As long as I can remember, I have always given Mankind the benefit of My Doubts. I was only eight years old when I found out that Cain killed his Brother and I knew at that early age that Mankind was Flawed. Later on at Ten I heard that we were our Brother’s keeper. Then I found out that around six Hundred A.C. that the World was Divided, it still is. 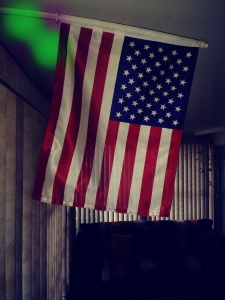 Will someone work with me here? Where is a Figurative Mind supposed draw Conclusions. Einstein tells me that I should never stop wondering. Jesus tells me to turn the other Cheek, my Jaw hurts from the Backhand of Hate. How am I supposed to advance with my Spirituality with all my Doubts. I ask God for a Sign to keep me Focused and he sent Joe Biden, someone Enshrined with Empathy, a Child of God who wants to follow Jesus’s footsteps and Teach us how to Heal from within and without. Months before the Election Mr Trump Paved the way for his current behavior to undermine the Democratic Process. He persuaded People to Circumvent the Mail-Ballot, Citing Fraud, six Months before the first Ballot was cast.

Today he holds the Democratic Process in Hostage Screaming Fraud. When in Reality he is the only one who have Committed Fraud. He Threatened to De-fund the Postal Service to hinder Mail in Ballots. The way he handled Cov19 is Reminiscent of Phil Collins song ” The Edge of Night” he did not lend a Hand in Stemming the Tide. Many of my Older Neighbors don’t even go out to shop for Food for fear of contracting the Virus and Die like Two Hundred and fifty Thousand Others. Yet he wanted them to go to Pooling Places and stand in Lines, Two Hundred and fifty Yards long. Hate Groups supporting him Threatened to Intimidate Voters, he Embraced them. Beleaguered Black People Protesting Sixty years of the Murdering of Black People at the Hands of Cops, were set- upon by Homegrown Terrorists.

Instead of Denouncing them he told them to stand down, as if to say stay in Readiness. While Deploying Federal Goons to Smash the Protests. Fifty four years I have been waiting for Black People to use thei’r Votes and Finances correctly. Today they did, when Democrats ask for Money we gave. When Joe Biden was Drowning in a Sea of Red we Parted it with a Wall of Blue and gave him his Victory, Voting 99% Blue. As for the One percent of Black People who Voted for the Tweeter, Harriet Tubman spoke about them Three Hundred Years ago ” I have freed a Thousand Slaves, I could have freed a Thousand more if only they Knew they were Slaves”. Slavery is still Prevalent in this Country.

Mental Slavery is far more Damaging than Physical. Seven years ago I moved Down South, what was I Thinking? Joe Biden is met with the Resistance that Jesus met with Pontius Pilot. If I knew then what I know now, I wouldn’t have Battled my Mother as a Teenager. She wanted me to be a Scholar, I wanted to be a Hippie, smoking Weed every Day. Now in the Winter of my Discontent I  realize what it means to be able to express myself in a Free Democracy. Back in the U.S.S.R. you don’t know how Lucky you are ” Boy” As the Man said ” I could have been a Contender”. Every time I want to Quit Blogging I realize that each Blog is a Chapter in my Book ” Through Her Eyes” the World through my Mother’s Eyes.

She saw Mankind as all God’s Children, I saw them as Minions. I am taking a Sabbatical from Blogging, what I have to say in my Book of me Enduring Fifty four years of Hate while paying Over One Million Dollars in Taxes and a Half a Million in Social Security, Funding a Government who Cast a Blind Eye on Racism. Many of them Hoist the Union Jack while Trampling on Old Glory. Like Through The Roots said ” I have had enough” Over the Years I have been Fortunate to have met some Great People, some just happened to be White, like Mark for instance, he was a great inspiration for me to start writing. I promised him many years ago that one Day I would write a Book and that he would be in it. It is Two Am and I am tired, this must be my writing Hour, Goodnight!

Here are Excerpts from the Book

Despite what the Rappers may say, I am not a Nigger. I’m Black and I am Proud. This Life has been a Time Travel for me, encountering Haters and Good People along the way. I have been Fortunate enough to call a lot of White People my Friends, some would stand Shoulders to Shoulder defending me against a Mob of Skinheads laying down their Lives for me if necessary. Yet there are Black People who would take my Life for a couple of Dollars and the Sneakers on my Foot. Like fifty Cent said ” you’re not like me” Back in Pennsylvania when I worked in Construction a Man of Polish Descendants and I became good Friends. Story told that one Day on a Jobsite in a School, one of my Coworkers were Badmouthing me calling me a Nigger up and down. They told me that Mark took two handfuls of his Hair and bounced his head along a Cinder Block Wall twenty feet long, do not talk about my Friend like that he Reprimanded him. Good company in a Journey makes the way seem shorter- Izaak Walton. So you see, Jesus is not Dead, his Spirit lives in some of us. His Spirit lives in all of us for that matter, yet some of us allows the Devil to Consume us with Hate. Satan was an Arc Angel who sat at the right Hand of God, he challenged God, he taught his Powers were greater than God’s. I have never professed myself to be a Religious Zealot, truthfully I am a Sinner,  ” Let he among you who isn’t a Sinner cast the first Stone”.

P.S. I didn’t start writing to take on Soft Issues to please my Readers with Hypocrisy, with the Sheeplike Mentality of not Rocking the Boat. Like Simon and Garfunkel said ” We all come to look for America, including the Pilgrims.

P.P.S. my Website is Approaching Two Million Hits, this is a great way to Publicize my Book. Taking a Vacation from Blogging and Social Media will speed things up.