In the year 2014 there were six million reported crashes, two million injuries and thirty four thousand deaths. Yet you wonder why I am so brutally frank when describing your Driving as mindless Drones and Bobbleheads behind the Wheel. Well with those numbers you are lucky I keep a civil Tounge and don’t resort to profanity. After fifty years of sharing the Roadways with you daily, I have embraced the truth that it’s a fool who does things the same way for fifty years always looking for different results. In fifty years of Driving I have honed my skills to the point I almost want to believe that I can do it Blindfolded. I can Text from my Dashboard yet I dismiss all text received while the vehicle is moving.

My vehicle has Sensors all around yet I am vigilant while maneuvering, even when traveling through the Desert at two A.M. because I know that you are out there. Mindless Drones who should not have a Licence. When I was a Kid growing up, when people criticized my actions I would reflect inward. Being contentious I would realize that their criticism was well warranted and so institute changes. The average Person can’t or won’t do that, especially when it comes to Driving, having your fellow Drivers giving you the Finger and calling you Vile names does not resonate. How Dense can you be I am travelling at sixty MPH and you gunned your Engine to catch up to me, then sit on my Bumper in my Blind spot. That is how People gets killed, Vehicles rolling and bursting in Flames.

When the Vehicles came paralleled I looked at the Driver, on her Forehead was an invisible Post it sign that read Idiot. My Car does 170 MPH yet I avoid the quickest Commute Route and use the slow Rural Rute. The reason for me to take the Back Road is that I like to enjoy the forty minutes surrendered by fine Leather and my Bose System listening to Slightly Stoopid, talking about Storm trooper. I also like not having to be on the cutting edge for forty minutes, or having to put the Needle of my Tachometer in the red to avoid over Zealous Idiots thinking that Driving is big Fun. U.S. 19 is the main Drag quarter of a Mile from my House, it is a 55 MPH Road where people have done 100 and got themselves killed along with others, did I mention mindless Drones.

Well they are the reason I avoid the quickest Route, they are all Cute thinking that they are NASCAR Drivers changing Lanes and Drafting, as if they are completing Lap 100 on their way to the Victory Flag. That is why there were over six million Crashes and over two Million injuries in one year. The numbers don’t lie, your Driving is Atrocious, your attitude is Pigheaded, you are irresponsible and Dangerous. What Irks me the most about people driving too fast in a congested area doing sixty in a 45 MPH zone, Is these same people gets in my way when I am winding down an eleven Hundred miles Trip at two AM  travelling at 85 for the last eight hours. They drive fast in City Limits, slow and unattentive on open Roads, they setup accidents wherever they go.

I have covered millions of Miles Driving cross-country, it’s a Different kind of Drivers you encounter on the open Road than Commuters Driving the same way for twenty years looking for different results, or Soccer Moms always late, doing too many juggling acts and running too many errands. And you wonder why I use Rural Routes to avoid these Maniacs. I plan to leave my Car as part of my Estate, I also plan to put a million miles on the Odometer while keeping the Engine brand new by changing the oil before it is needed. I am an Enthusiast who drives better then 99% of you out there, yet your Driving scares me, the numbers don’t lie 6 million Crashes in one year, two million injuries and thirty four thousand Deaths says you don’t know what you are doing.

Yet I see you every Day faking it acting and looking cool. Get over yourself you are not on a Stage on Broadway. Driving is a Life and Death situation, not Kids in an Amusement Park riding Bumper Carts. Where I Live in Tampa USA, some Attorneys approach Billionaire status handling Automobile Injuries. Why should I not be Terrified by your Driving. In my Neck of the Woods 136,000 reported Crashes in one year, with hundreds of Pedestrians getting ran over. Do you still think that you are cool with your cheap Sunglasses on, Texting a Mile a minute. A Day Will come when you become part of the Statistics, while some unfortunate Child’s single Parent won’t make it back Home. Driving is  common sense issues, too many of us have issues and take it with us behind the Wheel.

Three Days ago there was a Road Rage incident, a single shot was fired. When the Cops caught up with the Shooter, instead of pulling over he took them on a high speed chase, did I mention Issues. Sometimes I honestly believe that someone is putting something in the Water, something that brings out the Idiots in us. Why else would seemingly intelligent People get behind the Wheel and are transformed into NASCAR Drivers, Evel knievels and Wellendas, While the numbers keep rising. I visit my old Neighborhood once a week, because I didn’t change Banks. At this Ominous Intersection that have claimed many Lives were a new Roadside Grave that wasn’t there Last week. A Roadside Grave is a makeshift Grave that marks the Spot where a Loved one lost their Lives. 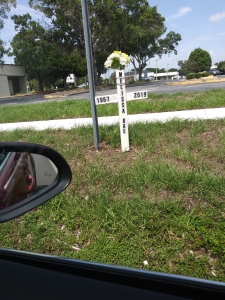 I’m from Back Mountain Pennsylvania, living in Tampa Florida is a Culture Shock for me. I have driven in many States where there were twice the Traffic, yet I have never seen the Statistics this high including Pedestrians Fatalities as in Tampa. I know that a lot of you don’t like my writing style of being Blunt and calling you Idiots, but if the Cap fits, let them wear it. Furthermore who gives a Rat’s  about what you think of my Krass delivery of the message, that your Driving Sucks and that you need to change your Galavant attitude about Driving, in order to save Lives. Someone needs to be the voice of the dead. Fifty years of Driving with no Accident charged to me, Never had my License suspended or Revoked, some of the years Driving Commercially eight hours a Day behind the Wheel in all Weather conditions. That gives me the right to call it as I see it. “Idiots”. When I moved from Pennsylvania to Florida, upon transferring my License, I found out that D.M.V. tracks your Driving Record. On my Florida Driving Licence there is a 🌟, indicating that I am a safe Driver. Feather in my Cap. What’s in your Cap. I’m not trying to win any Popularity contest or to get Likes and phony comments. I’m on a mission to save Lives, prevent amputations and disfiguring of young Bodies that have to spend the rest of their Lives in a Wheelchair. For God’s sake “slow down and put the Phone down”. The Life you save may be your own.

P.S. we have smart Cars, smart Phones, smart Water. What of People?

The greatest Daredevil, he risked his Life daily.