Jackasses Driving is a practiced way of Driving. It’s a total disregard for safety, it’s breaking all the rules, it’s the mindless operation of a Vehicle. Jackass Driving is always Driving too fast, someone with a point to prove, that they are as good or better than Dale Earnhardt. Dale was my favorite Driver, he was calculating but he took too many risks and in the end caused his Demise. I guess that if you are a Professional Racecar Driver and you don’t take risks, you don’t win 🏁 Races. Driving like a Racecar Driver on our Roadways is nothing short of Flight of Fancies, a lost of reasons and reality. My first Job out of High School was Driving Taxi in Manhattan, that was a proving ground for Jackass Driving. I once covered the Distance of the Island in half an Hour in Rush Hour Traffic. That is Jackass Driving at it’s best, cops and EMT Drivers can’t do that.

I Booked an average of six Hundred Dollars Daily. It didn’t take me long to realize that I had to quit Driving like that if I wanted to keep my License. Keeping your License shouldn’t be the only motivation to Drive in a Civilized manner. Always weaving Traffic, Barreling through the slightest opening and always taking risks goes against the Fundamental principles of safe Driving. Highway Driving brings out the best in me,  that is where I Drive by the Book, Traveling at 70-80 MPH there are no second chances. In High Speed Driving vehicles Disintegrate, burst in Flames and sometimes ejects the entire Seat from the Vehicle, Driver and all. So I ask you why would someone take the Antics of City Driving onto the Highway, Driving like a Pizza Delivery Driver, to be more precise Driving like a Jackass.

Once I drove nine hundred miles to the Carolinas. On the way back I gave the Wheel to a Family Member to avoid the fatigue of Driving the Roundtrip. Never in my life have I experienced Anxiety and Stress than sitting in that Passenger Seat waiting to Die. He passed everything on I 75 all the way to New York, he made Chicken Salad out of the Traffic for nine hundred miles. If the Traffic flow was 80MPH he weaved his way through to the next traffic flow of 90MPH weaved his way through sometimes up to 100. Thirty years later I still ask myself where is the Fire and why didn’t I jumped from the Vehicle. That my friend is Jackass Driving at it’s best. Many times I thought about slapping him in the Head but that would only hurry our Demise. My Nerves were so shot I could have had a minor accident of my own in the passenger seat that needed to be Shampooed. 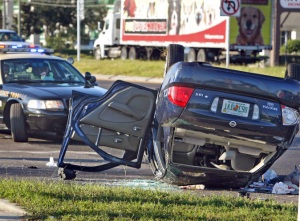 That was the last time I Drove with him, there were other family gatherings where we showed up in separate Vehicles. That is absolutely sad how many Maniacs like him are out there putting Lives at risk on a Daily basis. It never occurred to them that this type of Driving is Deadly until it’s too late. It was early afternoon, I was traveling on Rockaway Blvd behind Kennedy Airport. I came upon an Accident Scene that was like nothing I had ever seen before.  There were two halves of a Vehicle and a Lightpole separating them. Eyewitness accounts that the Vehicle was traveling in excess of 100MPH in a 45MPH Zone when it found the Lightpole, all four occupants were ejected, no survivors. 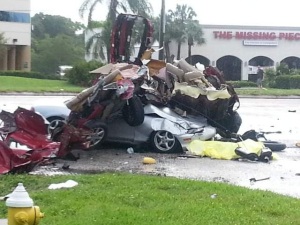 The bad part about all this is that I have witnessed so many Highway Fatalities in my lifetime, not reading about them, I should be Laying on a Couch and being prescribed Valium. Yet people would read my Blogs about safe Driving and go out there and becoming statistics of their own. That is the thing about Driving that I will never understand, people will take criticism about everything except their Driving, if you think I am lying the next time you are a Passenger, say to the Driver please slow Down. I have said that to one of my friends and he became Irate, yet I am not the one who Rolled the Vehicle on an exit Ramp. Jackass Driving is an Epidemic. 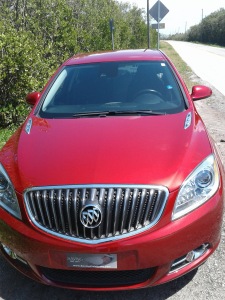 When I moved to Florida I thought that Floridians were the worst Drivers in the World. Then I realized that there are few true Floridians, they all moved here from somewhere else. Which brings me to the stark reality that Jackass Driving is a World wide problem. People who can’t cross the street safely are behind the wheel thinking that their name is Dale. People who can’t multitask in the Kitchen without cutting off a finger, these same People are out here Driving like a Jackass, while multitasking on the Android, Heaven help us all. If I didn’t appreciate my Driving Privilege of Driving to the Beaches, my secret Hideaways and my Doctor who is thirty miles away, I would surrender My License and never sit on the Gray Leather of my second Love ever again. Every day she leaves the Driveway I have to drive like Jedi Pilot to bring her back Home in one piece. Four years old and still in showroom condition,  My goal is to pass my Verano down to my Son. Buick decided to discontinue one of the best Cars they ever made, being cost-effective. In my Neck of the Woods Tampa, Jackass Drivers Rules, eighteen to eighty eight, they all drive like Jackasses on their way to a Fire.