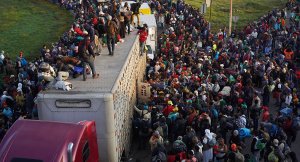 Imported Labor is a way of life, has been and always was. That’s how Capitalism is, cheap Labor rules, if you can manufacture a pair of Sneakers for ten Dollars and it Retails for $150 you are The Capitalist. Free Enterprise is good, Runaway Greed is bad. I work as a Contract Employee for a Justice System, that is where I met Jane a Latin American Immigrant, Columbia I believe. Jane lives and works in Florida, back home she left her Husband and a Son who is a budding Artist, in her Country she attended College, she never told me what she studied. However one can tell that she is a Scholar due to the fact that she is middle aged and is going to school to improve her command of the English Language and reconnect with her chosen Profession.

We became friends when she spoke to me in broken English and I corrected her in Spanish, she was impressed with the fact that I could hold my own with her Language and wanted to know how so. I explained to her that I took Spanish in High School for four years but over the years I became rusty from not practicing. We decided to Mentor each other, she would speak to me in English and I would speak to her in Spanish, that way we could correct each other. To me this is very commendable, a forty five years old going to school wanting to bridge the Language gap that holds her back. Earlier in our conversations she confided in me how bad the conditions were in her Country including the Economy, that is why she is here.

I suppose that somewhere down the Road she heard that this was the Land of opportunity where by the sweat of your Brows you can eat and live better than a Refugee. In her neck of the woods they jump Borders daily in search of work, only to find that the Grass is the same and in this Hemisphere it is only greener in America. Why should they not try to Jump the Wall of China, the Berlin Wall and the soon to be Built Wall of Freedom to separate Mexico and Latin America from the Land of Freedom. Your huddled masses yearning to breathe free, The wretched refuse of your teeming shore. Send these, the homeless, tempest-tossed to me, I lift my lamp beside the golden door!” is this only idle Talk or words spoken to give hope to the downtrodden beaten and broken seeking Liberty. All of this Hypocrisy about shutting the Floodgates reminds me of the Ten Commandments that only a few lives by.

The Church doesn’t feed the Homeless and don’t practice separation of State, in my neck of the woods Tampa Florida in the last elections a Church lost it’s Accreditation as a Polling Place for trying to influence Voters on which Party to vote for, many supports tighter immigration Laws while Soup Kitchens are far and few. Thanksgiving goes back to the early Settlers the Mayflower mentality has brought people here from every country in the World, which has taken on new meanings over the years. This Country was taken out of the Agricultural into Industrial into Internet Technologies from imported Labor,  the Brightest and the best have always abandoned their own Country for the Land of Opportunities.

No matter how much Charity is given to Third World Countries you can’t fill the void of all their best minds migrating here. First you need to fix the problem that caused them to inundate the Southern Borders. Instead of giving me a hundred pound sack of Rice, teach me how to farm so I can feed my Family for Life, instead of lending me a hundred Million that I can never pay back teach me to market my Resources. For each failed Economy in Latin America our Borders becomes inundated with hungry people looking for work. The least we can do is Process them, many of them is just like Jane educated and Industrious looking for a break. Simon and Garfunkel said it best ” We all come to look for America”