This is no place for a Gravesite Yet I see them everyday, a makeshift Grave for a Loved one who died at that spot. I have seen these Roadside Graves from Erie Pennsylvania to Dallas Texas and every States in between. The first time I started noticing them on the Highway, I thought to myself that someone needed to rest fell asleep at the wheel. Over the years I have come to realize that it’s careless Drivers who creates them. I drove a Truck for many years so I have been more exposed to Road Horrors than the average Commuters. The Department of Transportation and Osha warns of the Dangers of being behind the wheel for too long a period of time for safety reasons. So I must tell you that Truckers driving for eight hours a day do not cause 90% of the Highway and inner city Fatalities. It’s Soccer Moms , people running errands and people driving like Taxi and Pizza Delivery Drivers, and dont forget the thrill seekers who gets behind the wheel and think they are Racecar Drivers. 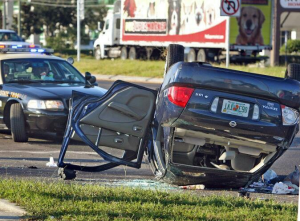 There is such a vast difference between a Motorist a Driver and a Vehicle operator. Most People on the Road are only operators, they got their Driver’s Licenses on minimal skills and they operate at that level for the rest of their lives. Bad Driving habits are like any other bad habits they are hard to break sometimes you never loose them until they wreck your life. I have known Jane for all of her life and as long as I have known her she was a reckless Driver, over aggressive and heavy foot on the Gas Pedal. I can’t remember how many bad accidents she has been involved in but none of them made her a better Driver.

Her last accident almost killed her, she never mentioned the other Driver involved or whose fault. The gravity of her injuries told me that all who were involved suffered badly. How can one live with oneself knowing that you cause such calamity on the Roadways because of your imbecilic attitude towards Driving.

As the saying goes, it’s a Fool that does things the same way all the time and expect different results. Whenever I pass a bad accident or a Roadside Grave it strengthens me to become a better Driver, most people neither of which phases them that this could be me, I have always tried to learn from other people’s mistakes, I have been Driving for forty seven years with two wrecks that weren’t my fault and every time I get behind the wheel it’s a new learning experience watching my fellow Drivers Driving mindlessly knowing that the Lord looks out for Babies and Fools.

Not only is it the Lord’s job but to stay alive out there you need to be on the constant lookout for them, remembering to drive like you are the only one out there that knows what they are doing. Then you have the ones who think that Buzz Driving is their God’s given right, also the Chronic

Alcoholic who have been Driving impaired for so long it becomes second Nature. Once while working for a Major Corporation my Boss took me to Lunch at a nearby Bar and Grill, before we were seated his lunch was at the Table a double Scotch on the rocks. Before we left he had another and before his long Commute he would have a couple more. I’m quite sure that when he got Home he had another couple, this was his daily routine he had been doing it all his life until one day going home he ended his Life along with three undeserving Motorists.

Billy Martin had been known to drink and drive, one morning while riding with a Drunk they drove down an embankment killing themselves and so another Roadside Grave was created. Today we have an Epidemic of people who can’t even have sex and chew gum at the same time, yet these same people never put down their Cell Phones, oftentimes they are Texting while driving at sixty MPH or better. When they make impact with your Car there is no skid marks. In conclusion I am telling you to always drive like your life depends on it, because it does.